This past Saturday, after the Derecho rolled through, runner friends of Sophie Speidel gathered from far and wide to run “Sophie’s Death March.” Runners from (at least) Harrisonburg, Richmond, the D.C. area, and a few CAT Runners joined in the fun. Look at that group!

Marc Griffin, who ran the Eastern Divide 50k the week before, drove to Cville in the wee hours of the morning, and the two of us then met up with Stuart Brown by the airport up 29, before making our way over to the Whiteoak Canyon area in the Shenandoah National Park.

The loop begins with a 5 mile climb with ~3000 feet of gain from the parking area up to Hawksbill, the highest point in the SNP. Sort of a rough start, but the trails are great, and Marc and I settled into a nice relaxed pace behind the really speedy group. Mostly our goal was just staying on trail, as I’ve only done this loop once (and with folks who knew where they were going), and Marc missed a turn last year and ended up a few miles south of where we were supposed to be. So we took our time, stopped at intersections to check our maps, and managed to make it to the top without issue. Climbs might hurt a bit, but the views are almost always worth it:

We couldn’t quite see it, but apparently if you knew what you were looking for up there, you’d have been able to see the smoke from a wildfire in the SNP, another 20+ miles North.

Anyway, shortly after we started down from the summit, we ran into Regan, Jack, and Marlin, and decided to run with them. So we spent a few more minutes hanging out on Hawksbill, and then made the descent down to the Appalachian Trail. It was somewhere around here I started thinking I could probably be happy ducking out from the full loop (~24 miles), and just doing 17ish. Sophie’s loop had us taking the AT up to Skyland, where there’s a lodge and we were able to refuel (despite the power being out). As we gathered back up, Regan convinced us that the long loop really wasn’t that much longer, and was totally worth it, so off we went. North on the AT, we skipped the little out and back for Stony Man, and just kept on chugging along to the turn for Corbin Cabin. With most of the climbing out of the way, I was feeling pretty decent on this section, and as a group we were able to keep up a pretty solid pace. I was walking hills I didn’t need to be, but as this was going to be my longest run since January, with only an 18 miler a few weeks earlier, I was guessing things were going to fall apart for me.

Though temperatures were forecast to be up near 100, we had a nice early start, and the storms the night before seemed to have helped keep things a little cooler than expected. Getting up a couple thousand feet also helped the temperature, and there were some lovely breezes at Hawksbill and along the AT. I don’t remember what time it was we would have been starting back down off the mountain, down the Nicholson Hollow Trail, but it was definitely starting to heat up. Fortunately, this section of trail has lots of stream crossings, which we were happy to stop and cool off in. The water was delightfully chilly, and helped keep us moving. In one of the last crossing before hitting the Weakley Hollow fire road, we actually saw a water snake, which was pretty exciting, if not too worrying.

The fire road was the section I was least looking forward to, and part of the reason I wanted to cut my run short. It’s a 5ish mile section of dirt road (which was sort of a relief, as I thought it was more like 8 miles), but the first half is all uphill, with the final nearly 1000 feet of climbing for the day. Last year I was in much better shape and managed to push through this section pretty well, but this year was much happier to walk more than I “ran”. At the top, the road hits the Old Rag fire road, where the shortcut would have dropped in. Despite my fears, and general apathy about running the hill, nothing really fell apart for me, which I was very glad for. The final two mile descent was pretty sweet, and Marc and I ran into Stuart who had opted for the 17 mile loop, on account of his “fascist” foot, which worked out pretty well for getting back into the car at the finish.

One of the nice parts about the finish, for this run, is the little creek right at the parking lot. On the way in, I thought it looked pretty barren, but apparently it was enough to keep hot and tired runners happy: 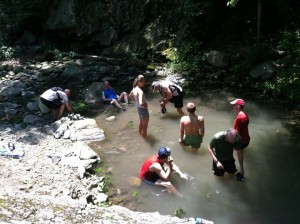 The other good part about the finish was that this was very similar to other VHTRC outings I’ve been to, with a great tailgate at the end. The park rangers were reasonably impressed.

After a relaxed hour or three of great food, camaraderie, story telling, and watching Gary Knipling bounce around and keep everybody smiling, we three CAT Runners headed home, eager to return again next year.

One thought on “Sophie’s Death March”