by Marc Griffin
A friend of mine — Charles West — heard about a group of people that were heading up to attempt to run the entire Shenandoah National Park section of the Appalachian Trail, which is 110 miles, in 3 days beginning Friday, May 24th.  Knowing that I am up for anything and a little crazy, he forwarded the email on to me.  I have been looking for something a little bigger to do this year and this sounded perfect.  I immediately emailed Matt Smythe, and I was in.  The plan was to stay Thursday night in Front Royal, get up early and be on the trail at 6 am to cover the first 38ish miles on Friday.  After we finally found the trail head we took our “before” picture and set off around 6:15am.  There were 4 of us total, Matt, Amie, another Matt, and myself.  It was cool but very nice running weather. 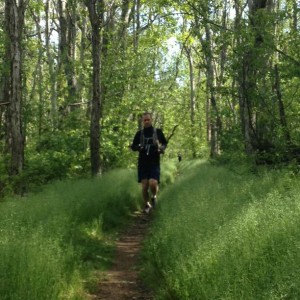 The first day came and went with easy running mixed with quite a bit of hiking.  It was hard to hold back and not run too fast, especially on the beautiful down hills.  As we got closer to Skyland Resort where we would spend the night, the temperature started to drop and the wind picked up a lot!  We got to Skyland around 4:30pm took showers and had a great dinner at the restaurant there.  The second day came very quickly and we set out around 6:00am.  It was cold and windy; I put on as many layers as I could but could still feel the wind through everything.

The trail was beautiful and I was still feeling pretty good.  This day would be approximately 44 miles and some of the toughest trail of the weekend.  I felt pretty good until we hit Swift Run Gap which is Rt.33 coming out of Harrisonburg.  These mountains were big and just one after another.  Somewhere in here we saw our first bear, it ran at first but then stopped about 50 feet off the trail and just watched us.  We sat there for quite a while just watching him.  It was a mutual attraction.  We slowed down quite a bit in this section but continued on and finally made it to our campsite at Loft Mountain Campgrounds around 7:30pm.  Luckily, we had the best crew in the world — Matt’s mom and dad.  They had ordered food for us before the Loft Mountain kitchen closed at 7:00pm.  By the time we washed up a little and set up our tents, it was time for bed and time to try and stay warm.  Who would have thought the temperatures would get down below freezing this close to June!
The third and final morning came very quickly and we were again on the trail by 6:30am, finally the wind stopped and the sun and warm temperatures came, it was a very nice change.  We only had 27ish miles to cover and we took our time and enjoyed it.  We came into Rockfish Gap at approximately 2pm and had a small celebration.  It was sad to see it end. 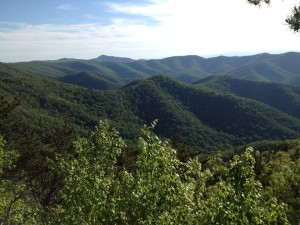 I really didn’t know any of the runners or crew going in but we had such a great, epic experience together.  It was cold, it was rocky; we suffered together, cheered each other on, and celebrated together. What more could you ask for?  I heard a few whispers about doing another adventure like this continuing south from where we left off next year, I’m In!!!!!!