As many of you know, a group of Charlottesville Area Trailrunners were among the 300 or so racers at last weekend’s 2011 Promise Land 50K+, a David Horton race with about 34 miles of distance and 8,000 ft of climbing.

We had some big finishes, including a 15th place finsh for Drew Krueger and 20th for Joey Cohen (this was the first run of PL50K for both of them), and 1st Master’s female for Sophie Speidel.

Congratulations to all racers!

Sophie’s race report can be found on her blog here:

Here are reports by Drew and David:

In the aftermath of Mountain Masochist in November, I found I had done a number on my left IT band. I cut back my running quite a bit and, while rehabbing my leg, watched the pages of the calendar turn along with races I had hoped to run. It was tough to be missing several races I had really been looking forward to; however, I knew not rushing a return to higher mileage and racing was the right decision. I set a soft goal of toeing the line at the Promise Land 50k to mark my return to full health, and this past weekend, that goal came to fruition. 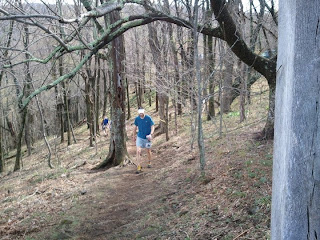 It was a huge relief when I saw Bob up the trail and realized the climb was over. I pulled into the aid station, took down a few cups of water and prepared for the fast downhill. I had little hope of catching back up with Keith in this section, but I still tried to run the first bit fairly fast. I hadn’t seen anyone coming from behind, so I wasn’t too worried about being caught from behind.
After a few miles of the downhill my abs and back were seriously revolting. It felt like my abs were about to burst they were so tired. I looked back up the road behind me and didn’t see anyone coming. Also, I hadn’t seen any signs of Keith ahead, so I felt I had my spot in the race fairly well sewn up. As such, I decided to back off the pace a bit and enjoy the last couple miles into the campground.
Despite the significant core pain, I was feeling pretty good. I appreciated the opportunity to relax the last bit of the race and reflect on running strongly despite an oddly negative mental day for me. It would have been easy to phone the race in and just run relaxed the whole day, but I was pleased that I had continued to run fairly aggressively all day. I started to see cars in the distance and knew the end was near.
It was great coming into the campground to a bunch of cheers and enjoying the last few yards. As I crossed in 5:38 Horton yelled out my name, and congratulated me. Perhaps the biggest highlight of my day came next when Horton looked down at my race number (#94) and yelled out, “Boy, I seeded you wrong!”
The post-race celebration, like the entire race event was a blast. It was great to meet so many runners and to cheer in the rest of the CAT runners as they came into the campground.
Congratulations to all the CAT runners on races well run. Again, the support of the club has been absolutely great throughout the build up to the event as well as during the event (thanks again for coming out to cheer us on, Bob!)

This was my second running of the PL50K and my fifth 50K since I began running ultras about 18 months ago. By far, this is my favorite. The natural beauty of the course, the tough uphills and long, gentle downhills, combined with a kick-butt atmosphere at the Promise Land Campground, makes for a great race experience.

Last year, I ran a very slow 8:22 but was still all jazzed up after finishing. My plan this year was to use a substantial buildup in training volume and speed work to make a significant improvement in my race time.

Things during training season didn’t go quite as planned. After putting in very high quality training prior to Holiday Lake in February, my volume slacked off considerably because of heightened problems with my piriformis, and because of a busier work schedule during my teaching semester.

But I wasn’t about to give up on running the PL50K given how much fun I had last year. And I was inspired in recent weeks to go for it, both by Bryon Powell’s discussion on iRunFar.com of enjoying races when not as well trained and by Bob Clouston’s great effort this year to finish at Boston with an injured calf.

So we when Drew and I set off by car for the race Friday afternoon, I was feeling pretty good. The ride down was great, as were the camp atmospherics that night. It was fun joining up with Joey Cohen there and hanging out with him, great to see Marc Griffin, fun to see Sophie and meet her gang at the camper, and of course, very entertaining to watch David Horton in action during the “schwag” giveaways. 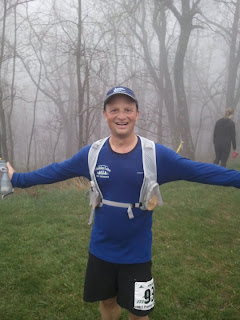 The race started promptly that morning at 5:30 am in light rain. At first, I was far from inspired as I trudged slowly up the first long hill, which seemed to go on forever and which I seemed to walk slower than everybody else in the race. But at AS 1, I knew from last year that the running would get more fun, so I perked up and started to pass folks. The run down the grassy jeep trail to AS 2 was as fun as I remember last year. It was here that I saw Quattro “Q” Hubbard for the first time and heard him giving race advice to others as he ran with them. Nothing was more inspiring then rolling into AS 3 in the fog and seeing Bob Clouston there. What a big spirit lift! Bob reported to me that Drew was running well, I grabbed some more water and eats, and was feeling now like this race was going to be a lot fun.

And the rest of the race WAS fun. I followed mentoring advice (mainly from Bob) and made constant progress forward, moving quickly through aid stations, and made sure I was popping Endurolytes and eating gel on a regular basis to stave off cramping and keep the energy up. I also let gravity be my friend as I could see that I could pass many on downhill sections –I guess my thick body provides the mass needed to gain momentum downhill while not giving up much in terms of energy. At the beginning of the race, I often got passed again on the way back up a hill, but by the second half of the race, once I passed someone on the downhill, I never saw them again until the finish — a good feeling.

From Colon Hollow on, I met up and ran near a couple of newlyweds, Kelli and Craig, from Gainesville, FL. They were fun and great to chat with, both because I lived in Gainesville for two years when I taught at UF and because Kelli and I ran near each other in last year’s PL50K and both wondered how we would finish in this year’s race. Kelli and Craig were great too because they were a young couple that were just finishing up school and readying themselves with new careers and a life outside of Gainesville.

Anyway, as the three of us made our way up the Apple Orchard Falls trail — shuffling and power walking but never needing to stop — we decided to shoot for a sub 8-hour finish. By the time we got back to Sunset Overlook that meant booking down the last 4+ miles to the race finish in less than an hour. And that we did! My legs felt amazingly good during that last stretch as I continued to pass many faces familiar from the first half of the race.

By the time I reached the Horton last-mile marker (at 33+ miles), I was ready for the race to be over, but knew that sub-8 was in the bag. I finished in 7:52:29, or about 30 minutes faster than last year! (Kelli and Craig came in together right around the 7:50 mark).

For any of you that have not run this race, it is a challenging but very rewarding run, especially if you love the great mountain outdoors!