adminJune 8, 2011 Fatass, Flipped Truck Fat Ass 50k++, group run 1 Comment
A few months ago I decided I wanted to do a long 30-40 mile run on June 5th. I would be going on vacation a few days after that date to an extremely secluded area where the surface area of water far exceeds that of land. Given the lack of continuous land mass, the possibility of running would be out of the picture during this vacation. Since I wouldn’t be running during the majority of this time, I figured I should probably get in a nice long run before my vacation started so I could utilize the downtime as true recovery time. I knew the North Face 50k/50 miler was going on in DC during this time, but that race didn’t appeal to me. I really wanted to get up into the mountains during my long run.
After looking over my options, I decided two loops in Sherando would be my best bet. The first loop would be around 16 miles and the second loop around 15 miles. I could start the first loop really early and hopefully begin the second loop around the same time as the usual CAT Sunday run. I thought by starting the second loop at the usual time I could get some folks to join me for the second loop and provide a bit of a mental boost. After putting out some feelers, however, it appeared there was no interest in joining up for the second loop, but there was quite a bit of interest from folks in joining me on the FIRST loop at 5:15 a.m.!
Come Sunday morning, I was on the road shortly after 4:00 a.m. Ground to lightening strikes were illuminating the sky north of Hwy 64, and I was questioning if the weather would permit running along the mountain ridges of Sherando. Shortly after 5 a.m. Bob, David, Christian, Joey and I were all standing in the dark parking lot off Coal Rd. contemplating which direction to run the first loop. The plan was to set out in the Mill Creek direction. However, I seemed to overlook the need for a headlamp at this early hour, and Bob had the good sense to recommend we start off running on Coal Rd. first where the running would be much smoother and safer without a light. The only concern we had with this option was that none of us had run the Mill Creek-Kennedy Ridge-Coal Rd. loop counterclockwise and there was some question to how easily we would pick up the Kennedy Ridge trail off Coal Rd.
We were correct to question our ability to locate the Kennedy Ridge trail from Coal Rd., as we ran ¾ mile past the trail before we decided to consult the map and better determine where the trail was. We eventually found the Kennedy Ridge Trail, but not before running an extra 1 ½ miles and losing a bit of time fumbling around. Unfortunately, David was in a bit of a time crunch and decided he wouldn’t be able to run the full loop with us, given the lost time trying to find the trail. While David got some extra miles in on Coal Rd., Bob, Joey, Christian and I started the climb up the Kennedy Ridge trail.
The Kennedy Ridge trail is both steep and quite technical in the miles closest to Coal Rd. When descending this trail, one is pushed into a feverish pace where you feel like you’re barely ‘holding on.’ Ascending the trail, however, offered the opportunity to take in what one hurriedly passes during these descents. With the mountain laurel still in full bloom and some exceedingly steep pitches, you’re literally forced to stop and smell the flowers now and again.
After regrouping at the top of the climb, we continued along the jeep road towards Bald Mountain. After rounding a corner a few miles into this section, Joey and I were stopped in our tracks. These trails are heavily populated with black bears, so being halted by a bear on the trail is not uncommon. However, instead of staring down a predatory mammal, Joey and I were staring, jaw-dropped, at a lifted Dodge pickup truck flipped on its side, consuming the entire trail. After getting over our initial shock, we had the good sense to run down and check to make sure the occupants of 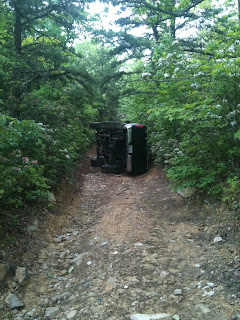 the truck were not in need of medical attention. Luckily, we found no people or signs of injury to the occupants (we did, however, find several empty beer cans that were shaken out in the tumble). We had some fun taking pictures and trying to piece together how the truck ended up where it was before continuing our run, a bit dismayed, at what we had just come across. 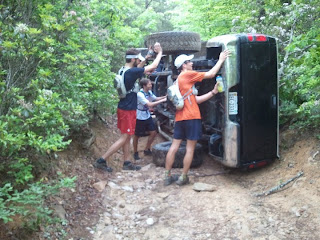 I think all of us were pondering all sorts of questions as to how that truck ended up where it was after we returned to running. About a half mile down the trail, some of these questions started to get answered. Joey and I were again forced to a halt as we saw two bodies lying motionless across the road. We gave pause and waited for ‘back-up’ from Bob and Christian before we approached any closer. As we stood waiting, the trail sleepers woke up, and they quickly identified themselves as the drivers of the truck. Aside from appearing a bit hung-over, they didn’t look any worse for wear (from the truck flipping, at least). Some terse conversation yielded a request for us to help them push their truck right-side up, which we declined, and we again continued towards Bald Mountain. Peeling off the trail to take the switchbacks down towards Mill Creek trail, we ran into a group of what appeared to be Boy Scouts. We informed the group of the two guys on the trailside and the overturned truck, and the adult leaders of the group put things into perspective further by recalling the caravan of pickup trucks, beds full of coolers and people boozing it up, that had been parading across the jeep road the previous night.
The rest of the run was much less eventful! We saw a bear, we finished the first loop. Restocked at the cars, and headed out for a second loop running from Coal Rd.-Mill Creek Connector-Torrey Ridge-Bald Mountain-Mill Creek back to the cars. Joey, Christian and I ended up running 35 miles. I’m still amazed that Christian (on his PT recovery path) busted out an impressive 35 miles. I was struggling during the second loop and here Christian is, still not 100%, running 35 mountain miles like it was nothing!
After finishing the second loop, we sat at the cars, ate some melted ice cream sandwiches, and relived the exciting moments of what came to be known as the Flipped Truck Fat Ass 50k++. Mark your calendars now for the first Sunday in June next year!
(Photo Credits to Bob C.)
Christian adds:
To be a-tune with my return-to-run program I was only planning on doing the first loop or at most 1,5 loops but couldn’t say no to the opportunity and would have felt bad ‘quitting’ early. I suppose I ignored the 10-15%-weekly increase rule and replaced it by 10-15mi… I know it was probably not the smartest thing to do but what can I say, I am young and naive 🙂 The run was great and I am glad I did it. I had to keep it slow and walk plenty of times but that was OK. woot woot mountains!

Our club on Strava