adminNovember 18, 2011April 23, 2015 Hal Koerner, marathon, Max King, mountain runs, Oregon, Race Reports, Rogue Valley Runners, USATF 6 Comments
While the CATs were up James River way
Running through the Blue Ridge
On a beautiful day
While Bob went delirious
And David got serious
Joey and Christian did impress
And Sophie clinched the L-U-S
Jenny coordinated with her mean green
Marc the Beast was a machine
While Drew sported his hipster hat
And Harry Landers chewed the fat
I ran the Lithia Loop
And that course deserves a trail “woop!”
Through the sleet and through the snow
A skinny b from the east
Gave it a go.
I had the opportunity to visit Ashland, Oregon for a job interview a couple of weeks ago and – sweet coincidence – the USA Track & Field Trail Marathon Championship was the Saturday after my interview.
The week before the race I ran with Hal Koerner et. al. (Race RD) from his Rogue Valley Runners store, which is great store in the heart of town.  He is a nice laid-back guy, and frankly you would never guess he has a freak-of-nature, trail-eating, ultra-dominating beast within him that he releases for races – he just laid down a 13:47:46 @ Javelina.  We had a good size group for their weekly run, and picked up trails right out of the center of town – “where Ashland ends, the trails begin.”
The Lithia Loop Trail Marathon starts and finishes in Lithia Park, which connects to the center of town.  From the park, the course circumnavigates the Ashland watershed accumulating 9,200 feet of elevation change on dirt roads and trails with approximately 2 miles of asphalt.  At the race start, the temperature gauge on my rented minivan (oh yes), read 36 degrees and it was starting to rain.  I was wearing running shorts, gloves, a singlet, and a thin fleece.  Hm.  That’s when I noticed a shift in paradigm – instead of “What the heck and I thinking?” I thought “Good Hellgate preparation.”
Being from the Beast Coast and reading “9200 elevation change,” I assumed that there would be some rollers, technical trail, and plenty of pine trees.  Imagine my surprise when I saw the elevation profile:

We kicked off the race with 8 miles of relentless climbing on gravel road, double track, and a smidge of single track.  Yes, 8 miles.  It appears that Oregonians are binge elevation runners.  Having learned that tidbit, I then learned the advantage of running a USATF Championship – the guy sporting a USATF tracksuit at the top of the climb who told me I was in 32nd place overall.  To which I replied, unfortunately audibly…

“Oh h$## no.”
So, I took stock of the situation – there was a half inch of snow on the ground, my thumbs were numb, and there was a mutant squad out front that there was no chance of catching up to (Max King won in 2:31:58 and the top ten finishers all went sub-3).  Maybe next year on the sub-3.
But this was a celebration of a fantastic week, and so it was time to hammer. I got my turnover up on the flat doubletrack which weaved its way through the watershed, admired the pines, and savored the special quiet of running in falling snow.  We then turned down for the final 8 miles which was so aggressive it had come banked turns and I channeled my inner Christian/Drew (who are too humble to tell you this, but are great downhillers) and ran hard.  My shoe came untied with 2 miles to go but I had people to pass and if Usain Bolt can break a world record with his shoe untied, I think I can muster 2 miles of downhill.
I finished 24th overall with 3:19:18 and had a blast.  I’m sure that next time with the …ahem… freedom afforded by the skinny b shorts, I’ll be even faster.
For the aficionados, I also had the chance to visit Eugene while I was out there the weekend before and got to…
(1) run a sub 18 min 5K (still got it! see #9 below) 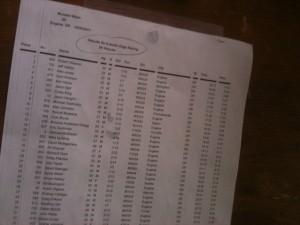 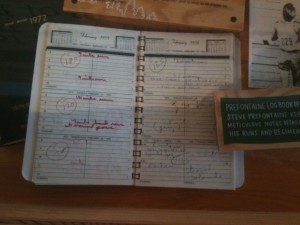 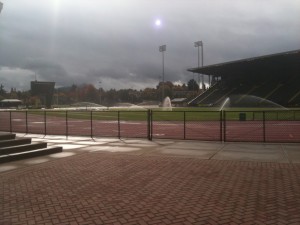 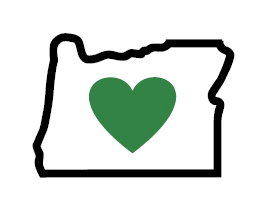 Our club on Strava