Last weekend, Sophie, Drew, and my daughter, Ceci, and I all volunteered at VHTRC’s Bull Run Run 50 mile race. Sophie acted as a sweep on the north part of the course, Drew worked the Marina aid station, and Ceci and I worked the Wolf Run Shoals aid station. This is one of VHTRC’s signature events, so it was very exciting for me to take part and also to see what is like on the volunteer side of things at a big race.

Here are quick rundowns from Sophie, Drew and me on our experiences:

I have started BRR four times, finishing in 2005 (9:03) and 2006 (9:00) and dropping due toa calf injury in 2008 and heat issues in 2009. After these DNFs (my only DNFs in my nine years of running ultras), I realized that training for and racing a 50 miler in early April was not a good idea for me—there are too many work-related stressors at this time of year, and, coupled with the threat of the first hot day of the year and being a very poor heat runner, it made more sense for me to volunteer and give back to the event than run it.

Last year I swept the last 15 miles of the course and ended up missing the post-run party. The last runner finished thirty minutes after the race cut-off, and we arrived back to the finish to be greeted with a closed finish area and folks packing up. This year I wanted to help out but also experience the post-run festivities, so I was happy to sweep the first 15- mile section with my good friends Jill Quivey and Kirstin Corris. 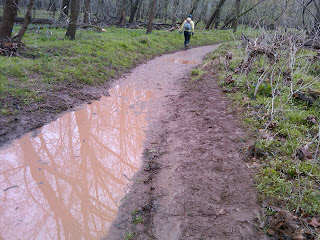 I arrived at the start about thirty minutes after the race had begun, and ran down to the first creek crossing in time to see the middle of the pack attempt to cross one of the many creeks of the day. Some folks actually took the time to remove their shoes while most others were smart and ran straight through the water instead of waiting in a long line to cross the stone pylons. The next creek crossing was very dicey, as the pylons were all submerged in at least a foot under water, and the current was moving swiftly. One poor foot placement and you would be in the water! In fact, a runner did fall in and get fully submerged at a creek crossing upstream, but escaped (relatively) unscathed. Other runners were a muddy mess, having wiped out several times on the slick mud. Needless to say this was a “mud year” and perhaps the worst since 2006. 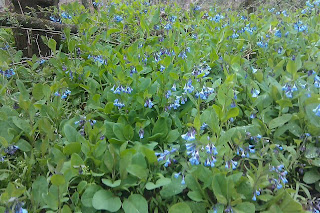 Sweeping is fun because you can see the entire race field, greet your friends as they run past, clean up the course markings, and then take a shower and cheer at the finish line. It was a perfect day, temperature-wise, for a 50 miler in the woods. I would strongly recommend Bull Run as a first 50 because of the impressive organization, course marking, great schwag, and post-run party…but mostly for the beautiful, runnable course that winds along historic Bull Run with the bluebells in all their glory.

I had a great time volunteering at the Marina Aid station (miles 21 & 44.9). I thoroughly enjoyed seeing all of the runners come through the aid station, and it was especially neat to be able to see them come through twice. (Picture of Drew hard at work.)I was amazed at how positive the runners all were, especially the second time through. Some of my personal highlights for the day were the runner who came through into our aid station and unfurled a Ziploc baggie full of bacon-and chowed down on it, and the unfortunate runner who came through caked head to toe in mud. When asked what had happened he simply replied, “There was an incident….” Additionally, I think we sometimes get focused simply on the front runners of the race and, in a way, tend to overlook the stories and struggles of the rest of the runners. It was very cool to be among some VHTRC vets who pointed out the stories of runners as they came through the aid station and helping to urge on runners who were struggling towards the finish.

Aside from enjoying the runners coming through our station, it was great to hang out with all the fellow volunteers at Marina. While I was slightly envious I wasn’t among the runners out on the course, I certainly enjoyed spending the day with a great crew of individuals and helping some fellow runners to enjoy what appeared to be a wonderfully run event.

For anyone looking for a great 50 miler to run or volunteer at, I highly recommend Bull Run Run!

Ceci and I worked at Wolf Run Shoals (WRS), which is the aid station for miles 26.1 and 39.9 in the race. WRS is a bit special because it has long been organized by a couple from Baltimore, Stan and Margie, who have taking to dressing up each year according to a theme. Themes are kept top secret until race day. This year’s theme was “Toy Story” and so I dressed up as Woody and Ceci was Bo Peep. Other characters present included Buzz Light Year, Mr. Potato Head, Jessie, Ham, and the slinky dog whose name escapes me (See here for a picture of the Toy Story crew). Dressing up made for lots of fun as the runners came through and my daughter had a great time with it too.

Personally, I liked having this great perspective that one misses as a race as a middle- to back-of-the-packer: I got to see all runners from the start to the back! It was enjoyable to see the leaders coming through, especially the impressive Matt Woods, who won the race, and Annette Bednosky, who I have heard a lot about and who seemed very pleasant. It was also wonderful to see all the happy, joking, and friendly folks that stop in for hydration and food. And, I also felt for those that struggled some. Overall, it was a great day. I look forward to volunteering in a race again soon!