The inaugural Belmead Trail Fest took place this past weekend.  Belmead is a conservation easement west of Richmond, not normally open to the public.  For more information about it follow the link above.

The race featured marathon, 50K, and 50 mile distances.  The course is a 10 mile loop, with partial loops to complete the marathon and 50K.  About 70 people took part in the three races, with the 50K getting a few more runners than the other two.  I ran the marathon.  The race attracted people from different states, but the Richmond area was most represented, including Martha Wright running the 50M and Bethany Patterson in the 50K.

The first part of the course was more like a cross country course.  After a start on a wide path and a bit of dirt road, we followed grassy paths on the outskirts of harvested corn field.  This section was pretty exposed so it got hotter as the sun came out.

The first well-stocked aid station came about 1/3 of the way through the loop.  As soon as you left the aid station you got onto very sweet, runnable single track twisting through the trees.  It was noticeably cooler in here.  Other than a couple short choppy stretches this was as good as it gets to the 2nd aid station, set nicely about 2/3 of the way in.

The last section had some hills, and some dirt road and wider horse trail.  There were a couple short steep climbs and some longer inclines.  Bethany’s “complaint” was that the course was “too runnable” which made it hard, but I had no problem declaring walk breaks in a few places, especially later in the race.

It was a first year race, so of course there would be a couple of mishaps.  The leaders blew straight through the first aid station without realizing there was a turn, and added about an extra mile.  Later in the race a turn was marked, but I missed that it was a sharp right to stay on a path I didn’t see.  Instead I went onto the dirt road just beyond it, and went a few hundred yards before realizing there were no markers.  I was further confused when I looked back and saw the leaders following me, as it turns out due to their first time off course.  Certainly they will learn from this and the course will be clearer next year.

Really nice wood carved awards that can double as coasters, and gift certificates to a Richmond running store to the top 3 men and women in each race. 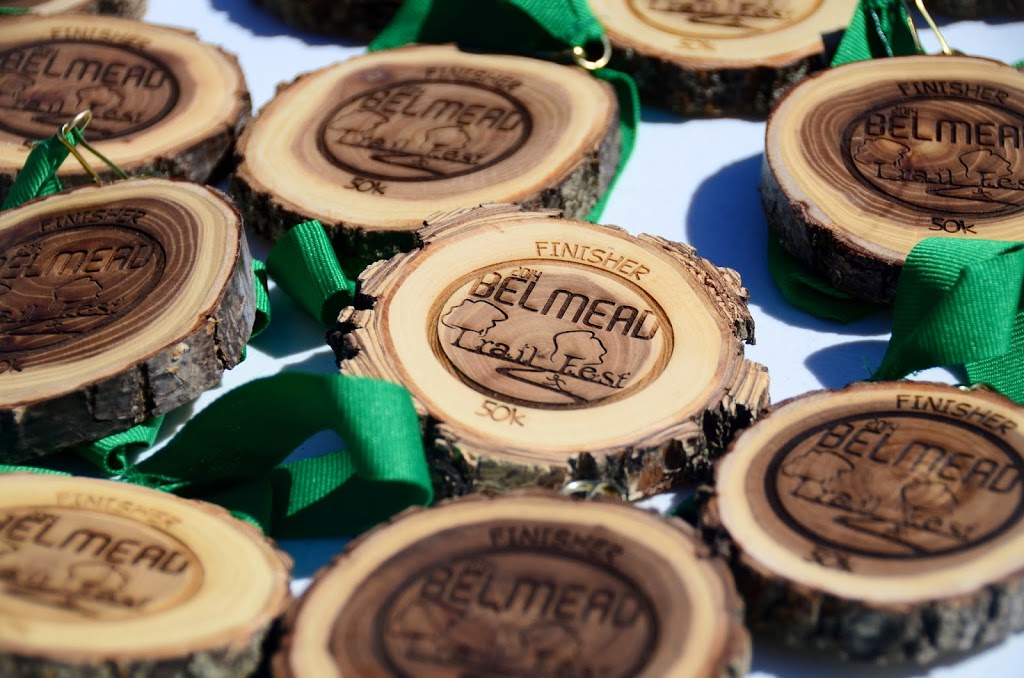 I definitely recommend this race next year for anyone looking for a flatter race or a nice training run for other fall races.  Someone compared it to Holiday Lake, but I liked the trail sections here better, and I’ve never liked the head on traffic at Holiday Lake as the second loop is run the reverse direction.