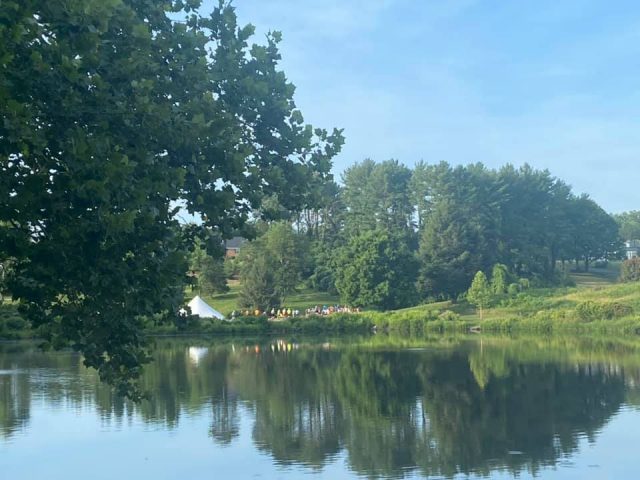 After the usual pre-race instructions, race director John Andersen reflected on the unfortunate death of friend and fellow racer Adam Kannapell at last year’s race.  We do not remember Adam so much for how he died, but rather for how running brought him so much love and joy while he faced challenges in life.  Running is good for one’s mental well-being as well as physical health.

Adam’s father Joe Kannapell was unable to come to this year’s race since he was competing in a half-Ironman out of state (Go Joe!!), so he sent a letter for John to read.

I could not ask for a better group of people to surround my son in his time of need, July 11, 2020.  John Andersen, the most caring doctor, stayed with me as Sophie was attending to Adam.  The Club was so gracious and consoling, like best friends, though I didn’t know you.  As a lifelong runner myself, I commend all of you for the fortitude and perseverance that you muster on these events.  You are the elite-of-the-elite in so many ways.

I pray that all of us will think of Adam’s incredible will and spirit whenever we meet tough challenges on the trail, or in our lives.  Adam never gave up, no matter how hard the race.  And he was always looking for the next race to conquer.  As a result, I was blessed to take him on many dozens of running trips; from Maine to Florida to California.  In fact, I’m continuing on the race schedule that he set out for 2020, since all those events were deferred to 2021.  That’s why I’m in upstate New York doing a 70.3 race today.  I am sorry to miss today’s Boars Head run, but I believe that’s what Adam would have wanted.

So, please reflect on Adam’s good life on this special day.  And I pray that you’ll be blessed with many injury-free years going forward.

And I thank-you from the bottom of my heart for your gracious condolences.

Thank you Joe, and Adam.

Mark Lorenzoni wrote a really nice tribute to Adam last year in his “On the Run” column in the Daily Progress. Definitely worth a read, or a re-read.

And then it was race time. Off the runners went! and…Where are they going? Director Andersen forgot to tell them to hang a right at the stop sign! Some wise guy suggested we could DQ the entire field for going off course, pack up, and go home. As usual, my suggestion was ignored. Since there appeared to be no real advantage gained or lost, the race continued as the runners quickly found the course.

Matt Smythe took a video of the start, which can be found on our club Facebook group page here. Hey runners, if this is the speed you ran all race, I could’ve won it!  Way to pace yourselves though.

The weather was about as good as you could hope for here in July, and other than a couple of chopped up downhills, the course was smooth and buttery. For those who had to take the rough sections cautiously, the way to get better is to practice.  Try to do some of your training on trails similar to what you’ll be racing on.

Sixteen year old Western Albemarle HS runner Owen Shifflett blazed to a win on the ~5.2 mile course in 32:44. WAHS alum Mike Fox once again was runner-up. We tease Mike about being “first loser” once again, but “back in the day” it’s very likely that Mike would’ve flipped the results in all three races. It’s nice to see him holding his own at the ripe old age of 41, and as a consolation, Mike is now the overall series leader. Race day entrant Joe Boyle nabbed third place.

In the women’s race, Beth Melton extended her series lead with her second victory, in a time of 38:38. Another race day entrant, Tiffany Polychrones, was just over a minute back for 2nd place. Emily Smeds kept her streak of podium finishes going, in third place. Emily is just over two minutes behind Beth in the series, so the Summer Meltdown will have a race within the race between these two for the series championship.

Speaking of a race within a race: twins Felix and Xavier Madri battled for the under 12 crown.  Xavier prevailed, by 2+ minutes.  The factor?  Felix stopped for the gummy bears while Xavier breezed right through the aid station to take an insurmountable lead over his brother.  I call this a win-win. Pretty fast times, too, as both easily finished in the top half of 155 racers.

We’re quite proud that nearly half of the finishers (68) are women.  Our goal is to hold fun, inclusive, and inexpensive races, and we take this a sign that we’re on the right track.  Maybe some of these women will push their distances to run ultras.  There’s a clear trend nationwide.  At last month’s Western States Endurance Run, the most famous 100 mile race in the world, 15 of the top 30 finishers were women! We’ve got some great local role models too.  Just to name one, how about Jana Briedis-Ruiz?  Her resume this year includes 3 for 3 first placings in the women’s 60-69 group, plus a 50K finish in April.  No competition at that age, you might think?  On the contrary, we’ve had a great turnout every race in that age group!

Quote of the race: “My sad place was the entire course. My happy place was just right here at the finish line.” — anonymous

Runner up quote: “This is bullsh!t.”  — me, messing up the race tracking program.  Seriously, if we missed you in the results, please contact us!  board (at) cvilleareatrailrunners.org.  We also record runner order using pen and paper for just this reason so I think we got everyone, and in the correct order.  A few times might be a bit off and you can also let us know if we were too far off on yours.

Nelle Fox took some great finish line photos, hopefully you can find yours. Tag yourself or a friend!

Once again we thank our volunteers for getting up early and helping us put on this race.  It would be chaos without them.  We also thank the Boar’s Head Resort for hosting this 3rd annual race.

Check out the Full race results and the 2021 Current Series Standings.

Runners:  We’d love to get your input on the course.  The first year had an out and back up to Round Top.  Last year, as a COVID precaution we made the “lollipop” loop course to avoid two-way traffic, and kept that course this year.  For those of you who have run both or are familiar with both, which course do you like best?  Comment on this post, or vote in our Facebook group poll, or email board(at)cvilletrailrunners.org.

If only I ran as much as I typed….